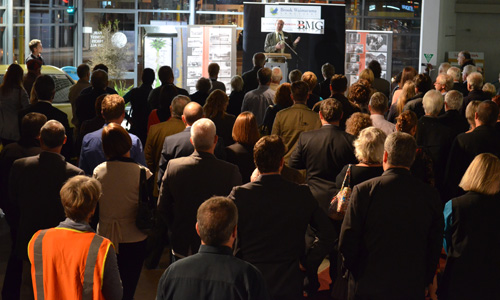 Fundraising for the Brook Waimarama Sanctuary pest-proof fence got a big boost with the official launch of the public phase of the campaign at Bowater Honda on Friday night.

Over 150 invited guests were treated to an evening of information, celebration and motivation to take the initiative and "Get behind the Fence". The evening was also an opportunity to celebrate the new campaign office situated in the top showroom of Bowater Honda's central city dealership. This new central city location will hopefully make the new phase of fundraising a little easier, with a more visible location in the heart of Nelson city, and the chance for those passing by to wander in and see progress of the Sanctuary project and even meet a few of the sanctuary locals, like the 3 very handsome gecko's in the campaign office at the moment!

It was a great turnout and a very successful launch event, with invited guests able to mix and mingle for the first part of the evening and talk through the project with a strong contingent of Brook Sanctuary Waimarama Trust members, Sanctuary staff, local Tasman District and Nelson City Councillors, local MP and Minister of Conservation Hon Dr Nick Smith, and Tasman District Mayor Richard Kempthorne.

Everyone was treated to wonderful music by local musicians Simon Williams and Gabor Tolnay whilst enjoying fine local wines, Bays Breweries beers and some delicious Old Mout Cider, all accompanied by an amazing selection of tasty treats from Blinc Catering. One of the surprise guests of the evening was the brand new into the country, yet to even be released to the media, Honda Accord V6 sedan; fresh from the national Honda Distribution centre in Stoke. It was quite a privilege to be able to show off the car to the invited guests interested in it. 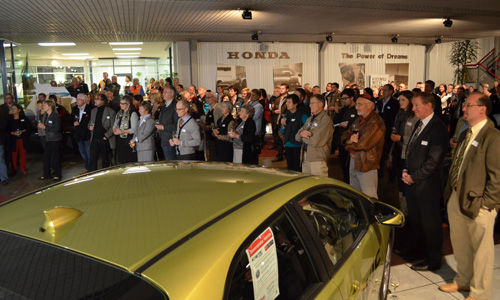 The guests listening to Bowater Honda CEO Chris Bowater welcoming everyone and sharing his excitement for the next phase in the Brook Sanctuary project.

We took some great photos from the event and have set up our own Bowater Honda mini campaign to help as many locals as we can "Get Behind The Fence" with our "Keeping you Posted" deal, but more on that later.

One of the evenings special guests was the Hon Dr Nick Smith, local MP and Minister of Conservation. He gave a rousing speech about the need for continued focus on conservation works, as well as giving a strong endorsement to the Sanctuary.

"The Brook Waimarama Sanctuary Trust has made admirable progress over the past decade in raising around two-thirds of the $4.7 million it needs to build the 14-kilometre fence around the 700-hectare site. The project is an exciting example of independent community-led conservation, which has an increasingly important role to play in preserving our natural heritage.”

Dr Smith himself sponsored one of the first fence posts at the event. “I hope this round of fundraising, where people can sponsor fence posts, will help get the trust over the line and the fence built,” he said. "The environmental benefit of this sanctuary is that it will enable native birds to again be seen in Nelson gardens that have been absent for decades. It will also provide an economic benefit for our tourism industry by giving visitors an opportunity to see our own special birds in their natural setting rather than in a zoo. This sanctuary reinforces Nelson’s proud heritage in environmental leadership. I will be doing all I can as both Conservation Minister and Nelson’s MP to ensure it achieves its ambitious goals."

Hudson Dodd, BWS Trust General Manager, said the catchy “Save our Babies—Get Behind the Fence” campaign was already generating interest, with families, businesses and community groups among those sponsoring fence posts.

“In the first 3 weeks of the campaign we’d already seen 100 fence posts sponsored, generating $30k in funding toward the fence. People are excited to see the light at the end of the tunnel for fund raising. It goes to show that Nelsonians recognise the great benefits this project will bring to the region,” said Mr Dodd. The BWS Trust is close to the $3m mark, with the goal of raising $4.7m for fence project, which is expected to get underway late this year.

“We think the Brook Sanctuary project is an excellent community initiative, and are glad to be able support their efforts to return nature to the Nelson region. Bowaters is getting behind the fence, and we hope the rest of the community does, too,” said Mr Bowater.