The Brook Sanctuary has now set up a new campaign office in Morrison Square. We wish them the best of luck and will certainly continue to be vocal and passionate supporters of a wonderful community driven initiative.

This Nelson Mail article fills us in on all of the details.

Article by The Nelson Mail. Published 14.01.14.
Written by CALLY MARTIN 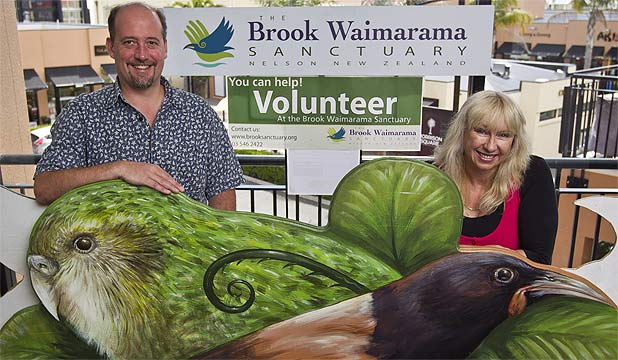 The Brook Waimarama Sanctuary hopes for a boost in fundraising and volunteer sign-ups after moving office to a more visible location in the city.

After leaving its old premises at Bowaters due to the showroom being refurbished there the Brook Sanctuary has set up a new base in Morrison Square.

The spacious new office, lent to the group for free, will be used as a place for events and recruiting volunteers, and its central location will help increase their visibility.

The trust hopes to have a pest-free wildlife area that will be home to various native animals, birds and plants by 2015. Its main fundraising goal is to build a 14-kilometre round pest-proof fence to create a sanctuary for native plants and animals.

Brook Sanctuary General manager Hudson Dodd said beech trees in the area were about to have a major seeding, which only happens every few years, and that abundance of seeds would feed unwanted predators, causing their numbers to skyrocket. That was why the fence needed to be set up as soon a possible, he said.

Fundraising for the fence is nearing its target of $4.7 million, but with one third still to go, Mr Dodd said the large new office would be used for fundraising events, too.

Mr Dodd said they hope to start building the fence in May, pending a $1.5 million grant - but there were plans to ensure construction went ahead, either way.

After the fence's completion, native creatures already in the area, such as falcons and kakariki, will be able to thrive, and other natives will be re-introduced.

"Once the fence is up and we're able to eradicate the pests, what's already there will really take off," said Mr Dodd.

To brighten up the office space and encourage people in, works by Takaka artist Dean Raybould, which depict the history of the sanctuary, are on display.