We are very excited to announce that Bowater Honda are conducting another Honda TreeFund Planting Day on Wednesday 19th September from 10am - 12pm at the Raised Carpark at Tahunanui Beach.

This is the first carpark on the right as you drive past the Skating Rink on the way to the back beach. Just drive down the back Beach Road and look for the Nelmac trucks, and the Honda sign written vehicles. You don't need to bring anything other than a great attitude and a caring community spirit. If you have a favourite spade bring that along too!

The Raised Carpark is at the very north of this map - the car park from which the Kite Surfing is normally based. We would love to see as many community minded locals down here as we can get.

Bowater Honda has provided Uniquely Nelson, the city's retail promotion organisation, with the use of a new Honda City this winter as we kick off the Free Parking promotion.

That's right folks, it is FREE PARKING in Nelson each and every Tuesday from the 24th July until Tuesday 4th September. 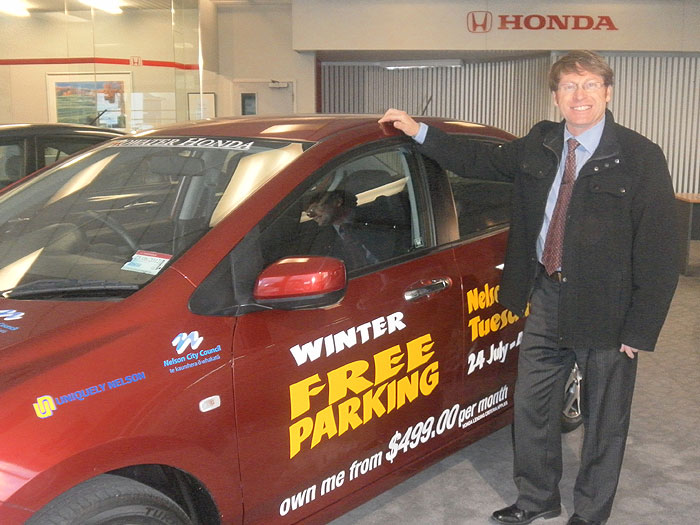 Chris Bowater is right behind the promotion and was more than happy to get a car sorted from Bowater Honda for the winter promotion. We can all use a break over the harder winter months, so a day of free parking is sure to put a smile on everyone's face! 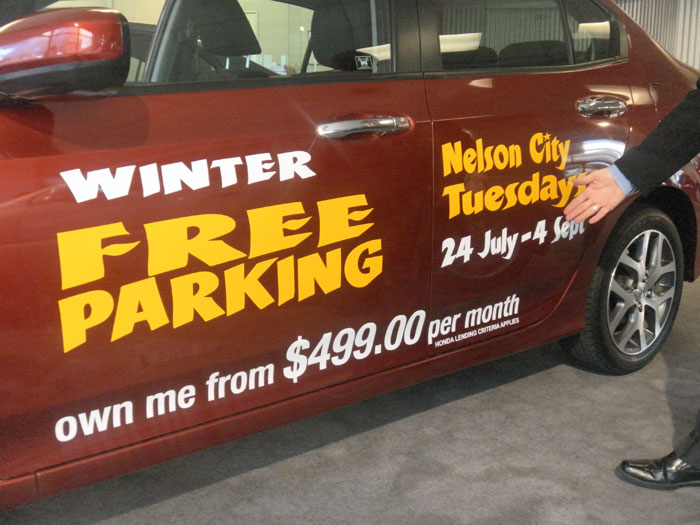 This article has just been published on the Stuff website so we thought we would share it here as well. 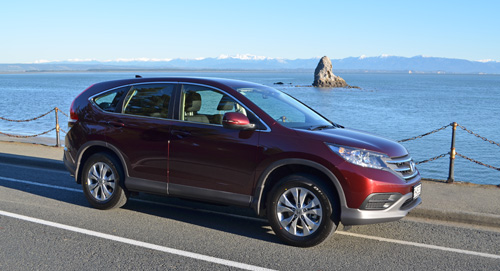 "With the Japanese tsunami and the Thailand floods stopping production during 2011, Honda's plants have been unable for some time to supply not only complete products from those factories but also parts, panels, engines and transmissions for the company's operations in Europe and North America.

Thus supply of some Honda models to many markets has been affected, and having run out of third generation CR-V models late last year, Honda New Zealand will be welcoming the arrival of the all-new fourth generation model, not only because it's able to satisfy some of the pent-up demand for the model, but also because it arrives with a remarkably sharp sticker that starts at under $40,000 for a car that shows absolutely no sign of penny-pinching.

Last week saw the first of the all new 2012 Honda CR-V's arrive into Bowater Honda on the corner of Rutherford and Hardy Street's. The Honda CR-V is huge in the SUV market, and a brand new model with an evolution of features and styling will always be an exciting moment for any dealership.

We have been running a radio promotion inviting locals to come down and take the Honda CR-V for a test drive. The first ones to get behind the wheel over the next couple of weeks all win a gift.
On Friday Gabriel Floares and Ana Giselle stopped by the showroom early on a frosty morning to take a test drive, and won a Pomeroy's Coffee voucher from the giftbox for their time. 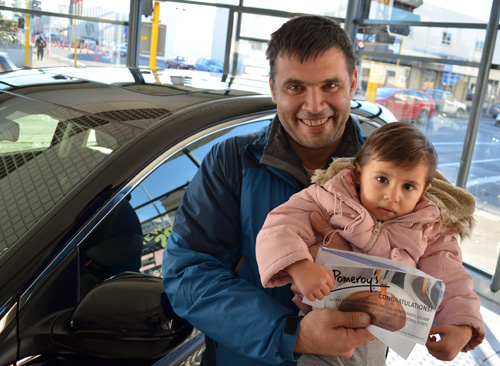 If you have heard our latest Honda CR-V radio commercial then you will know all about this and may already have your test drive booked in.
If not then you need to read on.