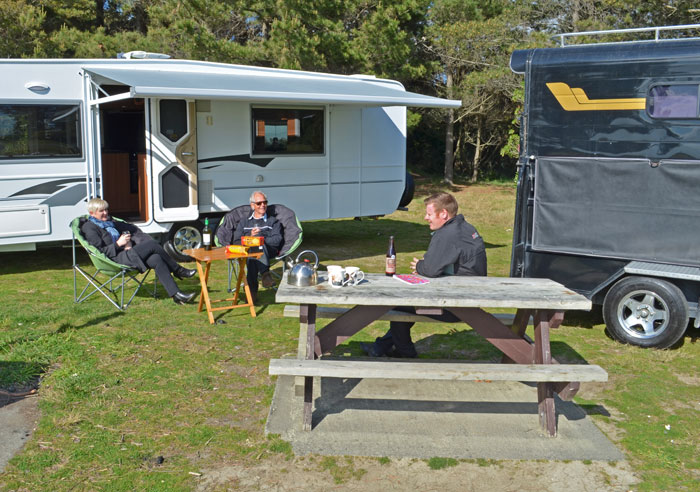 Getting away from it all takes a special kind vehicle. A vehicle capable of many things. A vehicle that can be a comprehensive tow vehicle one moment, an off road explorer the next, and still be comfortable enough for a quick trip into town to pick up supplies.

The beauty of living in the South Island is that there are still many places far off the beaten track. These places, for those in the know, are well worth the hardship of getting to them. These days though, vehicles like the Isuzu D-Max and Isuzu MuX mean that the trip is a whole lot more comfortable, and safer, than it ever used to be, even towing a massive caravan!

We recently caught up with new Isuzu customer Richard Holland out at Rabbit Island with his new Isuzu D-Max and very large, and very nice home away from home - a twin axle 2 tonne Southern Star Caravan.
We stopped in on our way back from picking up Bowater Isuzu salesman James' horse and horse float in the new Isuzu 7 seater SUV, the Isuzu MuX.

The timing was perfect for an old fashioned rest area stopover, a good old cup of tea and biscuits kind of affair. The kind of stop we all used to have back when car trips were quite the adventure, and required a stop for a cup of tea every couple of hours!

Richard and his wife are having the time of their lives. The decided to purchase this new luxurious caravan back in June 2014, and additionally had to choose which vehicle to get that would be capable of towing this rather large apartment on wheels.

There are quite a few choices on the market that can all do the job, but the Isuzu D-Max can not only tow 3.5 tonnes, but can also carry an additional 1 tonne payload; and it can happily take time out being a dedicated back country explorer as well! 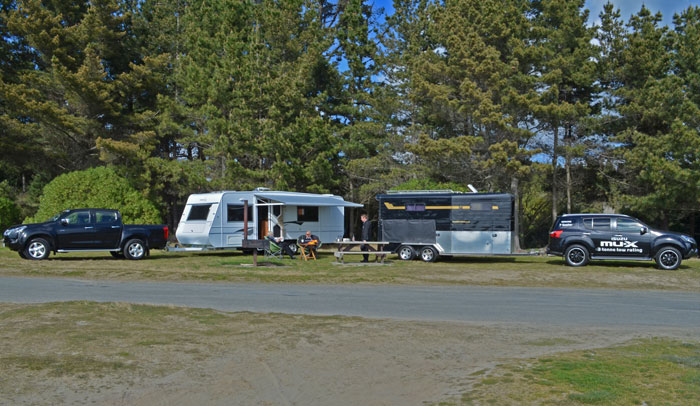 The right tools for the job make life a whole lot less stressful when it comes to towing big things like tandem axle caravans and large horse floats. It comes down to available torque and power in a wider range of revs. Both the Isuzu D-Max and the Isuzu MuX share the same engine - a turbo diesel engine that delivers 380nm of torque at a range between 1800-3000 rpm (for the manual variant). The maximun power is 130kw @ 3600 rpm. What this essentially means is that these vehicles can tow large loads easily; on the open road, up hills, and most importantly for Richard, off road down some of the sketchier DOC tracks! 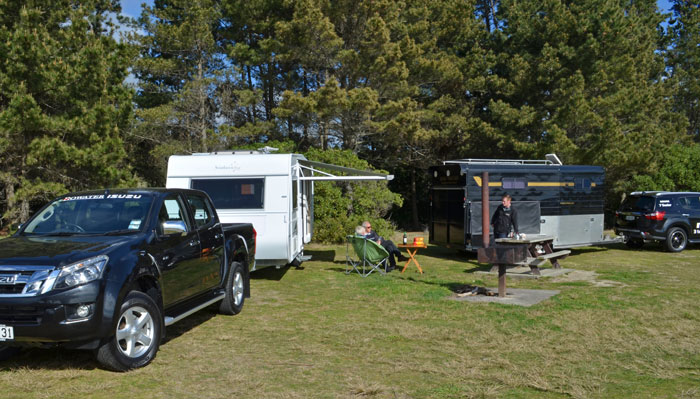 Having the ability to go further was something that really appealled to Richard. He chose his caravan partly because it had a much greater ground clearance than the cheaper imported European ones that are design for highway use only. As we all know some of our less frequented DOC gravel roads are less than smooth at the best of times, and as Richard also dabbles in a spot of fishing, the chance to unhitch and head upstream to some out of the way secret spots is now very achievable with his new D-Max. You can get into a D-Max yourself with the single cab chassis model starting from $43,390 inc gst, or a double cab wellside starting from $49,990 inc gst.

Great torque and towing is not reserved for the utes. The MuX also gets it done. 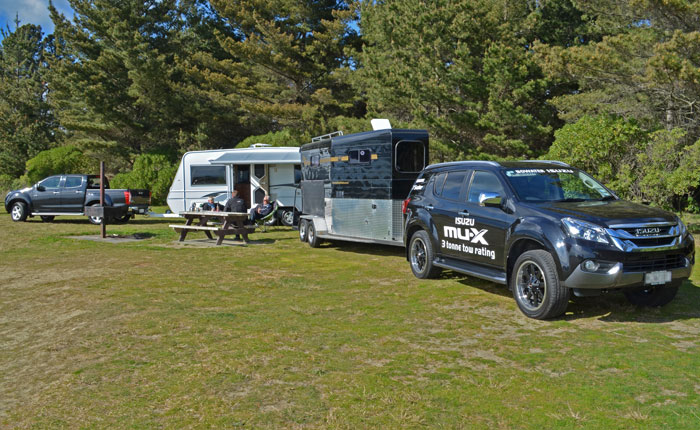 Our stop over with Richard for a cup of tea was a bit of a distraction on an otherwise busy day. Bowater Isuzu salesman James Duncan had a mission to do. He had to retrieve his horse and horse float in readiness for an upcoming competition. The Isuzu MuX is the perfect marriage between rugged workhorse and fine show pony - it comes in one grade level - AWESOME!
By that we mean when you want an Isuzu MuX there are no options to add or take away, it comes feature rich with things like ceiling mounted passenger DVD entertainment system, sat nav and 7 seats split on 3 rows. And by 7 seats they mean it can comfortably seat 7 adults. Trust us we have tried!

The Isuzu MuX is one of those legendary multi-use vehicles that really can do it all. It is a large SUV that can seat 5 adults and a whole bunch of gear one minute, then magically transform into a 7 seater with still the space to stow bags behind the 3rd row of seats. The MuX has the same engine as the D-Max but has a slightly less tow rating of 3 tonne due to the sacrifice made in the rear suspension to give an overall softer ride for rear passengers. All of this from just $65,990 inc gst. 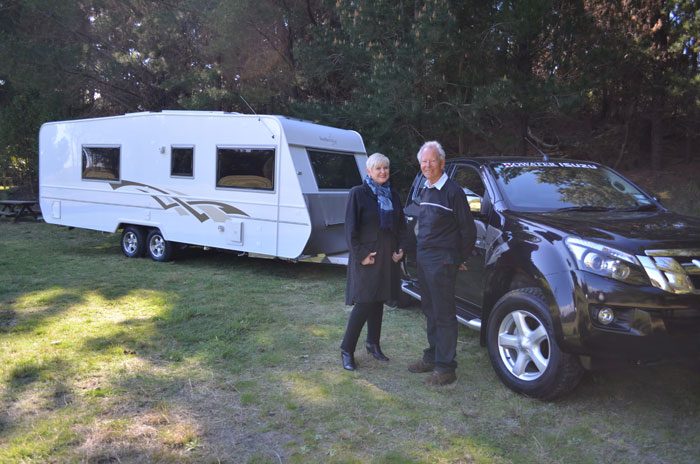