On the very last day of the Prius Challenge Nick Marer from The Little Pig Building Co came back to Bowater Toyota claiming he could do better on his previous attempt. His previous attempt was already very good, at 3.6L/100km, but not the best we had seen, and after his challenge he was sitting 7th on the leader board. 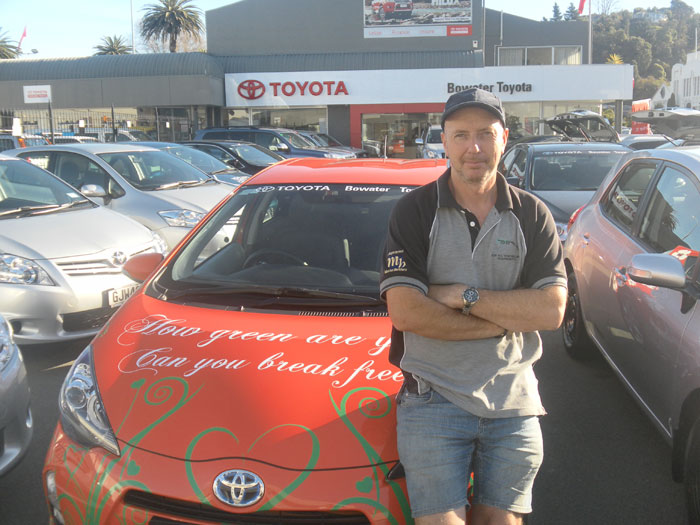 Being a Prius owner for the last 4 years, Nick had a few tricks up his sleeve, so he called salesman Chae Baird-Booth and booked another challenge knowing that he could do better. We are all for the competitive spirit, and if someone thinks that they can do better we will support them however we can, so we went along for the drive not expecting to film what unfolded!

He had a great run on the lights and the traffic for 2.45pm on a school day, and posted a quite unbelievable 2.5L/100km score, with a massive dollar saving of 93 cents over the Toyota Corolla hatch for the 7.5km journey around our course. It was very impressive to watch as Nick navigated the course, ever vigilant on the gas pedal and always paying attention to the traffic flow around him despite all of the questions and a video camera in his face.
The resulting video is 8 minutes long but very worthwhile if you are keen on breaking some old habits with your own driving and seeing how a fuel efficiency master does it! He made some very smart choices, had a slightly different strategy on some parts of the course, but generally just drove the course normally. The tricks were in how he did it.

Afterwards Nick was understandably very happy to be on the top of the Leader Board, and even happier with the prospect of driving the 2012 Prius C, with a full tank of gas, for a week later in the year.
With a fuel efficiency of 2.5L/100km and a fuel tank of 36 litres, if he could maintain that kind of performance he could technically travel 1440km on that one tank! 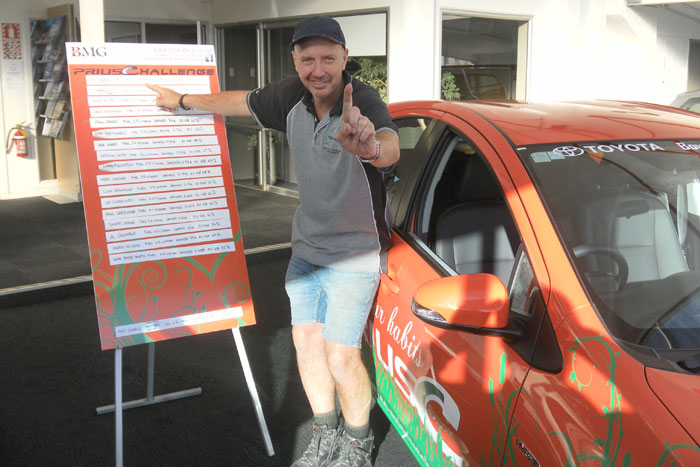 Nick Marer has proved that not only can you drive this car quite normally around town and get excellent fuel economy, but if you also plan ahead, pay attention to what is going on, and make smart choices, you can save yourself large amounts of money each trip.
On the 7.5km Prius Challenge course alone he saved 93 cents. If you take those figures and apply them to everyday life and were commuting each day from Stoke to central Nelson and back you could save yourself around $10.00 a week on just your drive to and from work!

You can check out The Little Pig Building Co's website here < http://www.littlepigbuilding.co.nz >
Or you can like them on Facebook < Click here > or Twitter < click here >
Nick is one smart individual, and considering the careful, thoughtful and forward planning way in which he drives, you can imagine that the houses he builds and renovates are also top notch! It is no wonder that he won an award for The Little Pig Building Co last year in the Registered Master Builders House of the Year competition.