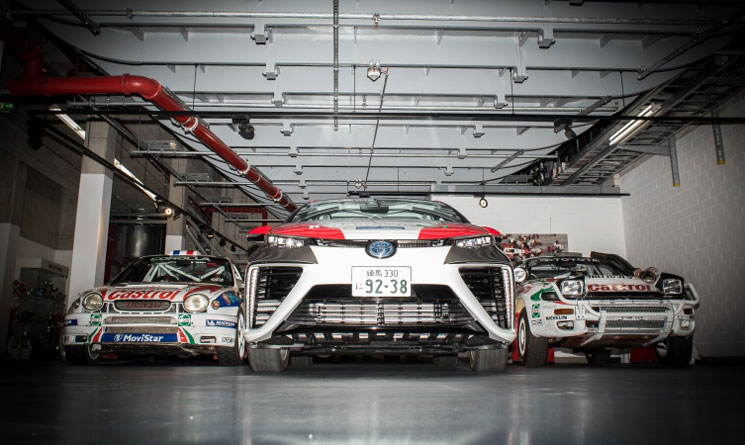 Used as a 'zero' course car, experienced rally driver and journalist Mitsuhiro Kunisawa used the car to precede competitors through the stage of the all tarmac event.

To be rally-ready, the Mirai was fitted with a roll cage, race seats and full harness seat belts as well as competition tyres and improved brake pads. To further aid Kunisawa, Toyota Germany provided a mobile hydrogen refuelling unit, which fills the plastic and carbon fibre tank in just three minutes.
The 100 kWs, 335Nm fuel cell power train remained unchanged. It fuses together hydrogen and oxygen in a fuel cell stack to produce electricity – powering an electric motor connected to the front wheels. It’s good for 0-100 km/h in 9.6 seconds and can hit 178 km/h flat out.

Yoshikazu Tanaka, the Mirai’s Chief Engineer, said that his dream is that one day we will see fuel cell vehicles competing in World Rally Championship events. Although spectators will need to familiarise themselves with the “noiseless premiere”, the prospect of an “almost pollution-free future” is enticing.

The Toyota Mirai has been on sale in Japan since last December and European sales kick off this October. It is about to go on sale in the United States.

With a 371-litre boot, zero emissions and a range of up to 500 kilometres, it’ll rival models like the Hyundai ix35 Fuel Cell, as well as all-electric models like the Nissan Leaf and plug-in Hybrids such as Mitsubishi’s Outlander PHEV.
Toyota New Zealand have indicated that there are no plans to introduce the Toyota Mirai in the near future.