Daryl and Edna MacLean got to experience something not a great many locals get to - a night at the luxurious Stonefly Lodge tucked away at the top of the Motueka Valley, courtesy of Bowater Toyota.

Stonefly Lodge is a premium lodge situated at the top of the Motueka River specialising in exceptional fly fishing right on the doorstep of the 150 acre property tucked into a valley off the main Motueka Highway. The views are stunning and the lodge has a"complete privacy" feel to it.

Architecturally designed and engineered, the Lodge is built from natural stone and timber acquired from the 150 acre property. Stonefly Lodge is designed to meet the needs of the most discerning traveller and yet provide home comforts with personalised hospitality from the experienced hosts. Daryl and Edna certainly appreciated the high levels of comfort of both the lodge and also the drive there, as part of the prize package was the use of one of our demonstrator vehicles for the weekend. We were right there with them as they arrived at the lodge in the brand new 2012 Toyota Hilux SR5. 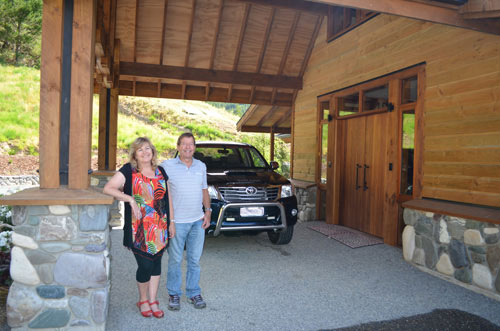 Daryl and Edna were the lucky winners of a promotion we held recently, and what a luxurious prize to win. Just look at their smiles!

Back in October we had a get together at Bowater Toyota's Motueka branch to celebrate the recent remodeling and renovations, as well as the fact that the Bowater Motor Group had been a part of the Motueka community since the late 1970's. 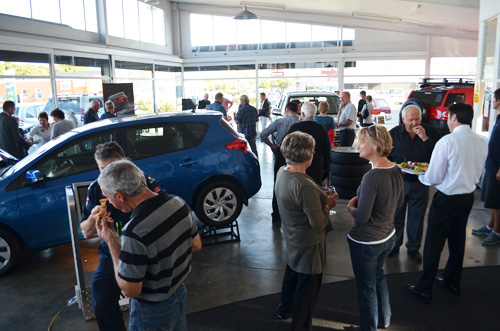 During the course of the evening we collected everyone's business cards, through them all into a very big and transparent bag, shook them up and drew out Edna as the lucky winner for the nights accommodation at Stonefly Lodge, and the use of one of our demonstrators for the weekend. 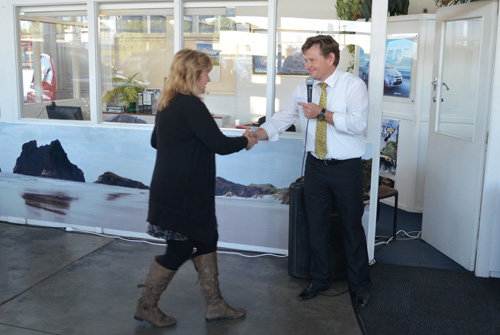 Daryl and Edna were suitably excited, and opted to take the 2012 Toyota Hilux double cab SR5 out to Stonefly Lodge.

They told us when we arrived there to photograph them that they had thoroughly enjoyed the drive up the valley through what has to be some of Nelson's most iconic landscapes. Having grown up in the region they had some great stories to tell of a time long since past - a time when the Motueka Valley was home to a very different kind of people.....the alternative lifestylers of the 1960's and 1970's. Daryl remembers as a young man rafting down past the site where Stonefly Lodge now sits, and carrying on to the lower reaches of the river, bobbing downstream on tractor tyres amazed at the sites to be seen throughout the valley of naked free spirited types cavorting on the rocks beside the river.  That must have certainly been a site to see for those teenagers that had grown up in the Motueka area and had no real idea what was behind all of these weird and wonderful young people moving to their seemingly "sleepy" region. Daryl can sure tell a story!

The last 2km to the lodge is down an unsealed road, so although this road is far from off road territory, just a little bumpy here and there, they had a taste of what the Hilux yearns for - the rougher stuff.

Stonefly Lodge really is a site to behold. It was a great privilege to go there to take the photos, so many thanks to John and Kate for allowing us to do this, and share with our wider online network. Scroll through the slideshow and enjoy looking at Daryl and Edna starting out their stay at Stonefly.

If you are keen to take a look at what Stonefly Lodge has to offer you can cruise over to their website here.
Or take a look at their promotional video and get your own taste of what our Bowater Toyota prize winners got to enjoy.