The first round of #gigatown is now done and dusted and all scores are reset to zero and the top 5 towns now start again on a level playing field. It is very exciting for Nelson to be one of those top 5 towns - but now the hard work really needs to happen!

We will post a couple of how to guides over the coming days on how we can all band together and get onboard the #gigatownnsn train and work towards bringing ultrafast broadband to our doors.

Whenever you see the Bowater Honda Gigatown Nelson CR-V out and about be sure to snap a photo to upload, and take a few moments to talk to the Gigatown Crew about how you can help. It does not require much, just a little from alot! 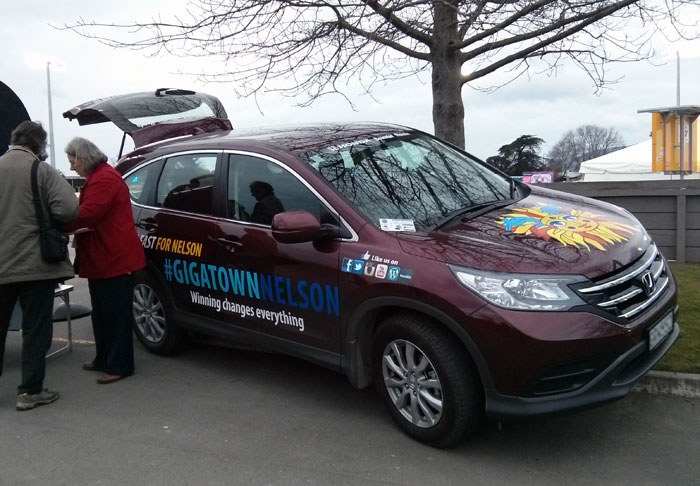 The team from #GigatownNelson at a recent Tasman Makos game getting the locals in touch with what a win will mean from all of us.

The Nelson Mail, our local paper, is even giving column centimetres to this remarkable effort, an effort that has been making progress due to the tireless battling away by a dedicated team of locals, and a few businesses like Bowater Motor Group, and Bowater Honda in particular.

Here is the article from the online version of the Nelson Mail:

Gigatown race steps up a gear

Nelson has a new race, starting today, to win the Gigatown competition for superfast internet, a $200,000 development fund and a $500,000 community fund.

The final five were officially announced online today - Nelson, Dunedin, Gisborne, Timaru and Wanaka will go on to compete for the chance to become New Zealand's first Gigatown.

The five towns will compete in five different challenges between now and November 25 to win points to clinch the Gigatown title.

The prize is three years' low cost access to gigafibre, which is on average 80 times faster than standard broadband, for all homes and businesses connected to the new fibre network being rolled out by Chorus, along with a $200,000 development fund and a $500,000 community fund over three years to kickstart developments that showcase how gigabit infrastructure and UFB can be activated for social good..

To become Gigatown, finalists would need to show New Zealand just how much they want to win by demonstrating strong community engagement, through having the loudest voice on social media, and the largest number of supporters, said Orcon general manager Mike Shirley today. Orcon has signed up to be the first retail broadband provider to support Gigatown.

As part of the competition, Chorus is taking representatives from the five finalist towns to Chattanooga in Tennessee, so they can see how a community can be transformed by world leading connectivity with gigabit services.

Nelson's campaign co-leader Matthew Dodd said today making the final was "a real tribute to the incredibly hard work put in by our team and all our volunteers, as well as the support we've received from everyone in the community. We can't wait for the next round - bring it on."

The Gigatown Nelson campaign team already has a Gigaparty celebration for making the finals planned for Friday but it will also be the start of planning the next steps and digital strategy to win the competition that started a year ago.

The Gigatown competition launched with 50 towns from around New Zealand competing to become the country's ﬁrst Gigatown.

Chorus developed the competition to help educate and inspire New Zealanders about the possibilities that a country connected with ultra fast broadband over ﬁbre would provide.

Clare Atkins, Nelson's campaign co-leader, said: "We have talented people and a creative and dedicated community - all the tools are in place to win this for Nelson."

The Gigatown Nelson team is already working on a digital strategy which will represent 50 per cent of the points, and the rest will be accounted for through social media and competitions designed to engage people in the new opportunities digital technology represents. Gaining support from other towns will also be crucial to securing the top spot. Information on the competition is available on gigatown.co.nz.

Anyone wanting to get involved or offer support/sponsorship can contact the team through This email address is being protected from spambots. You need JavaScript enabled to view it.